Not having a car in LA is more frowned upon than having bad credit, or being unemployed, or winning a Golden Razzie. Just as winning as Oscar gives your career a 38F-cup-size breast augmentation, a Razzie has been known to kill it, unless you are someone like multiple-Razzie-winner M. Knight Shyamalan, who is as weirdly indestructible as the Last Airbender himself.  You would think he would long ago have been thrown into the darkest malebolge of director’s jail with three consecutive seven-year sentences, seven years being the conventional duration of a director’s jail term in Hollywood, during which the studios close ranks and won’t let you make a film. Shyamalan’s career is, indeed, the first mindbender, that is until you take a close look at how much revenue his films generate per million spent, and then you get it: he’s still in the upper five earners out here. 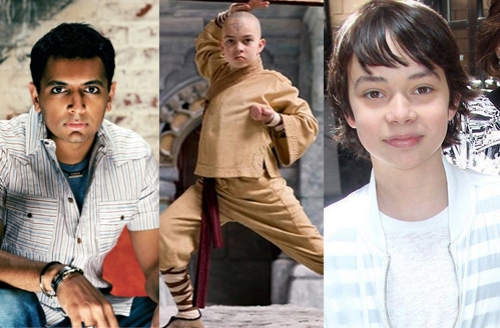 Mhmmm Night Shyamalan and the star of "The Last Airbender," Noah Ringer. Note that, even though Ringer doesn't appear to be Indian from his name, he does look like Shyamalan. I'm sure he was cast because of his superlative karate skills and his Fanning Sisters-level precocious acting abilities, not because the director might fancy himself as a small, magical boy beset by unending adversity. When judging Mhmmm Night's choice of star, you should also ignore the fact that almost everyone else in the film is of South Asian descent, as if the whole thing were a Hindu epic peopled with characters with Sino-Japanese names.

The fact that The Last Airbender is mindbendingly terrible has been said over and over by more astute critics.  I watched it because I was a boy once, too, who daydreamed about being magical and being able to fend off endless adversity; in other words, watching this sort of fantasy dreck is a guilty, pubescent pleasure, especially if accompanied by a pint of Ben and Jerry’s Chunky Monkey.  As an adult I find myself battling real and impossible odds, but without the benefit of cash much less magical powers.  The daydreaming has sadly faded under the frigid strafing of actual adversity.  It’s a pity because I could completely remove myself from this world with a fabulously imagined, detailed epic as a kid.

The best thing about not having a car in LA is you actually get to walk around, to pause and savor the weirdness, rather than zooming by with your eyes darting between the road ahead and the rearview mirror.  My polo-playing friend James Tuttle called the other day and offered to give me a lift to the gym, and I was almost going to say no because I enjoy the walk so much, but having a good chat with a witty friend trumped having a good think.

Yesterday on my walk to lunch in West Hollywood with my friend Alan Linn, the owner of Norwood, I came across this scene outside Hollywood High School on Sunset:

In case you didn’t get it form the murky Blackberry footage, it’s a sign twirling class in session.  Who knew there was actually training for this, but it looks like a lot of fun.  You can’t hear the audio well, but the instructors are yelling, “And ROLL!”  I recognized one of the students as a guy who hangs out in the apartment in front of mine, a tiny studio that seems to house an infinite amount of young musicians.  They just pour in and out of there day and night.  That unit is a case of how many hipster-ish guitar players with their instruments can you jam in a phone booth.  From what I can tell, there is no bed, they all sleep on the floor, which they vacuum once a day as if they were making the bed.  The vacuuming often trips the circuit board that connects the electricity in my apartment as well, so I’m treated to repeated power outages.  Ah, yes, this is exactly the future I dreamed of as a young person, along with world-saving magical powers: to be stuck in a Susan Blais-brand crypto-tenement in Hollywood, being serenaded at all hours by plaintive guitar ballads (one was entitled “How Many Holes in the Wall?”) and raving schizos and car sirens and the thump-boom-screaming-drunk-chicks nightclub across the street.  And to think that Mhmmm Night Shyamalan …. No, I can’t think about Mhmmm Night’s career; despite it all, I still have ambitions.

The last time I lived in LA — I moved to London after four and a half years here in 2003, and moved back to LA last August — I would never have dreamed of taking public transportation.  That was when I was still immersed in a reality that seems a parallel universe away after the seismic transformations my life has been through over the past few years.  Now I think it’s the best way to get around; for instance, I got to and from the Superior Court downtown in less than twenty minutes on Friday (see Palace of Fear post).  That wouldn’t be possible even in New York.

The extraordinary thing about the LA Metro system is you can plan your trip by looking up a schedule of subways and buses, which you can’t do in any other city I’ve ever lived in.  So far, the subway has been invariably on time, which would be astounding in Paris, London or New York. I have never been late for an appointment if I time it right.  The bus is somewhat less reliable for obvious reasons, but if you give it a cushion of ten minutes, you’re still going to get to where you need to go within a reasonable time frame.

And of course, any bus traveling within a three-mile radius of Hollywood is bound to carry the odd true-blue loony.  The other day a woman with schizophrenia and a thick Italian accent got on the 217.  No sooner had she sat in the back than she began a low-toned monologue with herself, which between the hum of the engine and the prattle on the TV (LA transport has its own TV channel, complete with an anchorman reading the news) became soothing after a few minutes.  Then I started to pay attention to what she was saying, and realized she was talking about having being molested by her brother as a child, but because she referred to herself in the third person, the narrative seemed eerily poetic.  It was disturbing, to say the least, but I couldn’t block it out.  It reminded me of Monica Bellucci stoned on heroin, reciting a portion Sarah Kane’s “4.48 Psychosis” as rewritten by Anaïs Nin.