Do Republicans Dream of Electric Elephants?

Michele Bachmann seems to have done well in the Republican debates.  It’s very early days yet, of course, but her populist extremism is something to marvel at.  Especially her extremism towards gheys and lesbotrons.

Rutger Hauer as the replicant in "Blade Runner," which was adapted from a short story called "Do Androids Dream of Electric Sheep?"

I was raised in a Republican household.  Most of my family is still Republican, despite my mother’s conversion to the Democrats following her split with Dad.  When I say a Republican household, it doesn’t just mean that they vote straight down the line conservative.  They are REPUBLICANS, all caps.  When we lived in Rome, my father was head of Republicans Abroad.  Before he left the advertising agency he worked for, he had worked on Margaret Thatcher’s campaign, and went on to do the Republican campaign of 1979, which swept Reagan and Company into power.  Ironically, the slogan he helped develop for them was “Vote Republican For A Change,” the same concept that helped get Obama elected twenty-eight years later.

I worked briefly for my father’s political ad agency before I moved into magazines in the mid-80s.  He had several PAC clients, including some rather unsavory ultra-right-wing gheys under the leadership of Carl “Spitz” Channel and his National Endowment for the Preservation of Liberty.  We were basically making ads for Republican election campaigns using Iran-Contra money, which we didn’t know, or at least I and the creative director I worked under didn’t know. 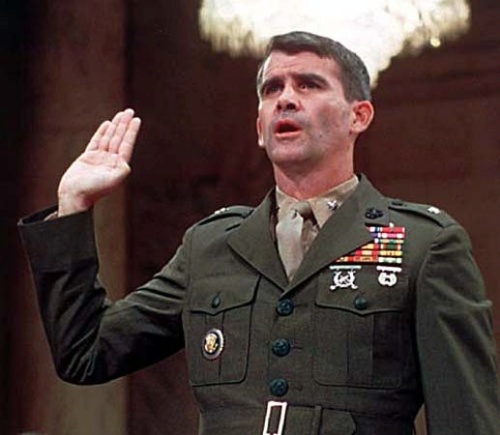 "Oh, big deal. Nicaragua is a banana republic, and why not sell arms to the Iranians? What did they ever do to us?"

My most memorable encounter with Spitz was when we went down to Washington to present storyboards for a campaign to promote Reagan’s Strategic Defense Initiative (SDI), a.k.a. the Stars Wars Program.  It was decided that because I needed the experience pitching, as well as the fact that I was young and relatively good looking and these were feral right-wing homos, I should present the boards. As we know from Mad Men, in advertising you always present the strongest concept last, and the biggest weapon in our arsenal was going to be an effects-laden spot which showed Earth as seen from outer space, with America in the center, of course, and all of these satellites in strategic positions linked up to form a laser web of protection against incoming Russian missiles.  I went through the storyboard, explained it all, at the end of which Spitz leapt to his feet and scared the shit out of me by screaming, “I love it!  It’s like a solitaire diamond!”

Being so wantonly  homo-smacked like that sent me scurrying back into the closet for another few years.

Spitz was Oliver North’s man, and Dad was dragged unwittingly into the Iran-Contra scandal.  It wasn’t just a can of worms, it was a barrel of maggots feasting on the corpses of oppressed Nicaraguans and Iranians, and that experience turned me off politics for good.  I’ll never forget that Spitz had this unfortunate beading of sweat across his upper lip all the time, perhaps a sign of imminent heart disease.  He died, disgraced, at the age of forty-four in 1990.  All I felt when I heard he had passed was relief that such evil was gone from the world.  That was one mean, corrupt, demented queen.

The few times I have stopped to ponder how the Republican members of my family can say “I love you” at the end of a conversation and still vote the way they do given that I am gay, I have reminded myself that from their point of view, there are plenty of gheys in their party, and they see no contradiction.  Indeed, Log Cabin Republicans deserve credit for the advances they have made in the repeal of DADT and trying to end the execrable Defense of Marriage Act.  This is because Log Cabiners are extremely focused, disciplined and un-fractious, in stark contrast with the more mainstream, liberal factions of the gay community.  We have so many different factions, in fact, so many various types of ghey — not to mention the lesbotrons, who react with us like oil and water — that it’s very difficult to reach consensus and move forward with decisive actions.  The Log Cabiners, on the other hand, are the Borg.

These days, Republicans like Michele Bachmann and Sarah Palin are reactionaries, as Trotskyite as unstable, meshugana rebels can possibly be.  For decades now, Republicans have had Abe Lincoln, and now Reagan, enbalmed in their minds like Lenin in his tomb in Red Square.  But they aspire to an ideal that simply isn’t there, isn’t valid any more; their Civil/Cold War is now an amorphous global conflict that neither woman, nor the party, is equipped experientially or intellectually to deal with.  America is also slipping, losing grip, and Bachmann and Co. are embodiments of that slippage: we should be at the forefront of gay rights, of acceptance, of social progress, not out there as viable candidates to lead the nation screeching extremist, troglodyte viewpoints.  Why doesn’t Bachmann do something positive with her passion and go after fat people and leave gheys the fuck alone?  Unlike homosexuality, fat is a true lifestyle choice, and it’s unhealthy, a drain on the economy and revolting to look at.

I was going to put in an image of a naked fat person here, but I didn't have the nerve. So I decided to go with a Botero because he paints naked fatties and makes them look interesting. Then I came upon this series he did about Abu Ghraib in 2005, which is kinda wild.

It’s not like Republicans own homophobia.  In fact, in my family the Democratic faction, i.e., my mother, is far more likely to commit anti-ghey sins.

Just before my brother married a woman from South Dakota, my partner Jonathan and I had dinner with my mother and her husband, and others, at the Union Club on Park Avenue.  I believe Thursdays at the Club are all-you-can-eat buffet “and the sushi is delicious,” which was part of my mother’s pitch to get us to put on jacket and tie and schlep to the Upper East Side.   Jonathan comes from a working-class family in Manchester, England, where working class is a highly evolved form of performance art with the singer Morrissey as its figurehead, and this sort of haute bourgeois New York scene that he was thrust into from time to time when hanging around my family often left him uncomfortable and at a loss for words.

The fact that someone from a family which enjoys the sushi at the Thursday night all-you-can-eat buffet at the Union Club on Park Avenue is marrying a girl from a farming community in a remote state that I still can’t point out on a map is very exotic.  Over dinner, there was some dispute as to whether the post-nuptial celebration in a barn in South Dakota was properly called a hoedown or a square dance, and that rather ridiculous spat sparked the beginning of tensions.  The wedding itself was going to be held on neutral territory in Denver, lest the scene end as a mash-up between Green Acres and Auntie Mame via a Coen Brother’s Gothic Western.  My brother even insisted on vetting my mother’s wedding toast, during which she still managed to make a comparison between the bride and my brother’s fondness for his Labrador.

“I do believe she’s just called the bride a bitch,” muttered Jonathan a few weeks later in Denver as we toasted the poor new inductee into the Bellicose Killoughs.

Back at the Union Club a month or so before, I was getting progressively stewed because it was pretty clear from the tenor of the hoedown dispute that the Bellicose Killoughs were gearing up for some sort of mass confrontation with the anarchic gay son, and my only way to handle those situations is to get shitfaced, which of course means I have a drinking problem and need treatment, etc.  My mother took the linchpin out of the grenade first with a loaded question: “And what do you think you’ll be wearing to the wedding?”

“I suppose Jonathan and I should go dressed as the gay couple from Brokeback Mountain.  We’d fit right in,” I replied.  Brokeback had just been released.

The only thing I could do was excuse myself and go empty my bladder to make more room for booze.  Afterwards, Jonathan confessed that while I was in the bathroom, We Who All Think Together tried to bring him over to their side and convince him to rein me in on the openly gay issue before the wedding.  He was shocked by the flagrant, uncensored homophobia from what should be culturally evolved people in the most cosmopolitan city in the world.  “Are they aware that I teach queer theory at university?” he asked.

Needless to say, I behaved at the wedding and wore the right thing.

I guess my warped way of thinking just can’t embrace the notion of supporting a political party.  I understand the need for governance of some kind to maintain social order, I understand being conservative in your views, or liberal, but I question the whole concept of being part of a political organization when so many members of that party are so manifestly corrupt, morally subversive or just plain vile.  Why would you want to be part of anything that has even a little bit of rot in it?

My mother has a rather flamboyant friend in Paris who begins every dinner party with, “At my table, you may discuss anything except for politics and religion; it’ll ruin the evening otherwise.”

Indeed, this is because religion and politics are so seeped in wrong that when you get into a fight trying to right that wrong, the aiguillettes de canard au sang will get cold and be ruined, or worse cause indigestion rather that a pleased belch.  And mum’s friend is right about lumping religion and politics together; faithfully, blinkeredly belonging to a political party is the same as being fundamentally religious.  And I won’t open that whole crypt of maggoty saints’ relics except to say that, like Bachmann, Pope Paul VI spoke out strongly against homosexuality, but in the meantime was busy turning the Vatican into a landlocked gay cruise ship.  (That was an almost complete non-sequitor nearly on a par with one of Tuttle’s closing statements.)

It would seem that where there is politics and religion, hypocrisy and injustice aren’t far behind, like a pair of psychopathic thugs.  Evolution is the key to life; we should never cease to strive for progress and true-blue, meaningful change, not advertising-slogan change.  So why don’t we revisit the whole concept of those twin banes of a righteous civilization and come up with something better?