I’m not a chick, and as I age I would make an increasingly frightening one, so I’ve only ever been marginally aware of TOMS shoes.  I believe the one time I came into contact with them I was hesitating between buying a pair of those or a handbag made of recycled materials for my mother as a house present.  I was almost going to eat the TOMS gimmick—buy one pair, and another pair is gifted to a poor child somewhere poorer than where I sit right now—but the recycled handbag won over as having the better narrative, as well as the more stylish design. And there was no fucking way I was paying $44 for those cheap-assed espadrille-looking things, which, as it turns out, really cost less than $5 to make. 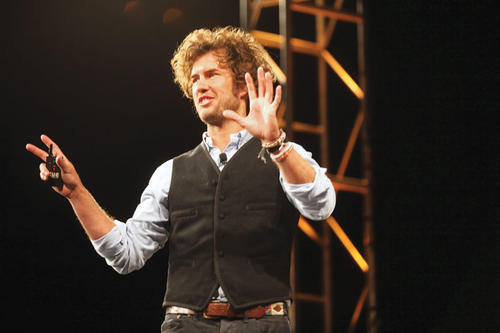 Plus, Mum really loved the handbag.  It kept my stock at her country house slightly above junk status for a good few weeks.

I’ve spent too long in India to be swayed by the TOMS marketing campaign, which basically guilts you into buying their crap merchandise for whatever thousands of percent mark-up $44 is from $5.  Their catalogue is rife with images of dire poverty, saying “Buy these shoes and save the world, one pair at a time.”  In India, a meal and work are more highly prized than a pair of shoes, but then again, it’s a barefoot culture.  And a floor-oriented one, too.  A meal and work are more highly prized than a bed, so any mattress company thinking to make a buck off people not having a proper place to sleep had better think twice before exploiting the children of the Mother of All Third World Countries.

I’m not sure where I was going with that tangent, so let me rein this back in. 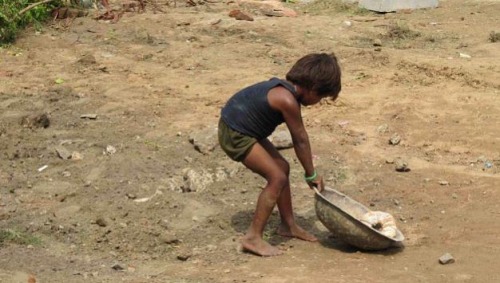 "Gee, thanks for the ugly shitty shoes. Can I have that cheeseburger now?"

According to the LA Weekly, the founder of TOMS, Blake Mycoskie, has yanked the veil away from bleeding-heart eyes by linking himself with evangelical, anti-gay Christians, specifically with the noxious Focus on the Family.  Suddenly, womyn everywhere are choking on their granola, looking at their feet and realizing they bought the story hook, line and stinker: they’re wearing woven straw covered with a bit of canvas that were probably made for $3.50, not even 5, according to Alibaba.com.

Would those $44 have gone to better use buying a couple of pairs of last season’s heels on clearance at DSW, which at least would have made your calves look less lesbian chunky and might have gotten you laid?  Hell, yeah! 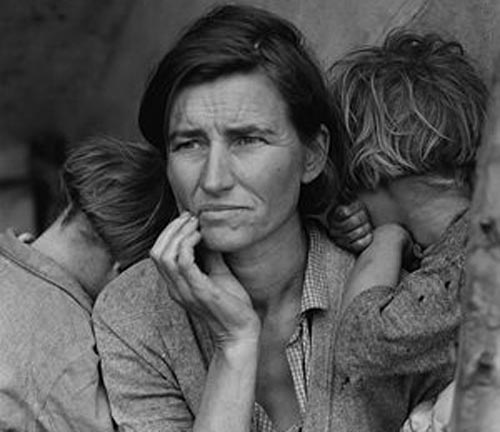 With a double dip recession coming up, let's take a moment here to reflect on an iconic image from the American Great Depression. She was 32.

TOMS shoes are made in China, not anywhere near where Blake could have given the parents of any child he bestows his fashion-challenged shoes upon a job, which in itself is enough hypocrisy for anyone to look at the made-in label and say, Hey, wait a minute, doesn’t China own the US?…  and drop the shoes and grab the family stock-raising handbag made from 100% recycled materials by Lesbotrons in Williamsburg.

So, let’s do the TOMS math.  You buy a pair of shitty espadrilles for $44 (which you could probably still get in some Chinatown somewhere for $10, a reasonable mark-up) and TOMS gives a poor child, whose image has probably already been exploited for free in the catalogue, another pair worth $3.50.  You add in Blake’s marketing costs, his stores (the build-outs for which are nominal), staff and other operating expenses, and you’re looking at maybe $11 per pair of shoes.  And he’s just “given away” the millionth pair. 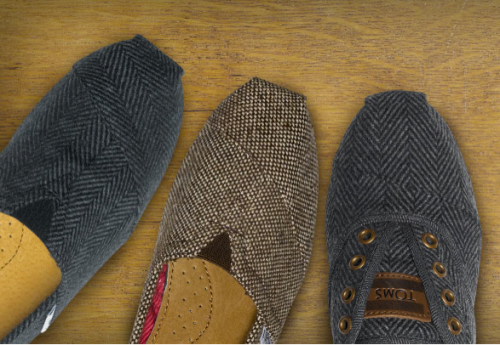 You don't need Tuttle to tell you these shouldn't be worn outside the house, and even then only in striped pajamas with a frayed paisley bathrobe. Oh, fuck it, just wear flip flops.

Some child in a hovel in Bolivia is throwing a pair of TOMS shoes at her mother right now, screaming, “What does this shithole look like to you, the Hamptons?  I don’t want another pair of fucking beach shoes.  I want to eat meat!”

What tickles my gander the most is that Blake Mycoskie calls himself “Shoegiver In Chief” as his title at the company.  Bwahahahaha.  The guy is not just an evil evangelical Christian who thinks he’s a do-gooder, he’s a dork, too, a supreme douche-in-chief.  Listen, Blake, I don’t mind that you dance with the devil in a halo, but don’t be delusional about it.  Just come out and say “I hate fags, my God hates fags, please still buy my shoes.” Marcus “Marcia” Bachmann will be the first to scream “fabulous!”

Being creepy and using a hot social issue to sell tatty merchandise isn’t new.  Look at American Apparel.  Serial sexual harasser and chronic masturbator Dov Charney, a Canadian, built a one-time empire on the back of American jingoism, marketing his crap products with the notion that they were somehow not crap because they were made in sweatshops in Downtown LA rather than in sweatshops abroad, where they don’t need work, either.  (We know the protectionist slogan well: Qu’ils mangent des chaussures, “let them eat shoes.”)

Dov Charney has several sexual harassment lawsuits pending. But, of course, "Those bitches are all out to get me." Who could resist such glamour, such pulchritude?

“I bought one pair of American Apparel jeans, and I’ve never worn them, not once,” Tuttle said on a hike yesterday, an excursion up the long way of Runyon Canyon which served as a reminder of how out of shape I’ve become cardio-wise since I stopped biking everywhere and started driving a supremely rusted 1990 Buick Park Avenue, which I’ve dubbed “Mother,” for obvious reasons. 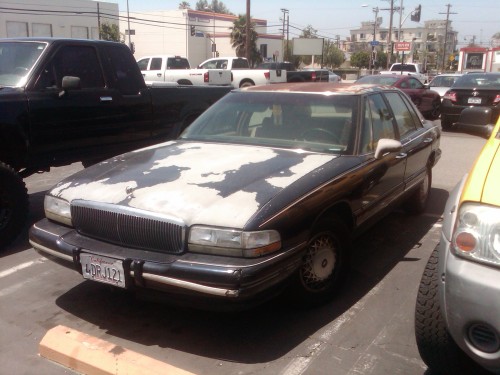 "Mother." The irony of driving her around Beverly Hills makes me weep with pleasure.

Okay, I confess.  When American Apparel first started, I did buy a sort of rust-colored chenille sweatshirt for my former partner Jonathan, which I think he wore either just to please me or because the material was handy in thwarting chronic London damp, in a pajama-ish way. Yes, I was lured by the marketing, by the all-American narrative, by the overweight Chicana beaming at a sewing machine in the initial ads, before Charney’s true nature took over and he got pervy with his products.

I bought it because it was one of those moments when I was coming out of my last meeting of a trip and thinking, Right, I’ve done everything… if I get on the 101 by 1:15, I can drop off the car at Enterprise by 1:45… shuttle to the terminal takes 15 minutes… what have I forgotten?  Present for Jonathan!  Fuck!  At which point I dashed down Hollywood Boulevard into American Apparel and bought the least offensive thing there: a rust chenille sweatshirt.  This is saying volumes about the cack they make.

Once Charney stopped exploiting his own workers for his ad campaigns, he slid further into hipsterville: past grungy, pasty kids who looked like they’d been busted by the photographer sleeping off a meth & junk bender, sliding deep into old Guess? Jeans territory until he fell out the other side into this recent charmer: 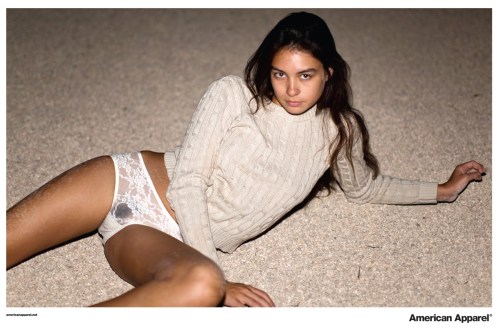 That muff don't feel like chenille, neither. Bet she can scrub burnt oatmeal off the bottom of a cast-iron pot with it.

The positive news is American Apparel stock is up to almost ninety-nine cents after Charney bought back a million and a half shares.  Which still makes him the richest man in my neighborhood, apparently.  Except out of all the houses he could have owned, he bought this concrete bunker eyesore on a hill:

Garbutt House has no fireplaces because the guy who originally built it wasn't just afraid of earthquakes. Best views of LA, though. Something to "woo" the employees with.

Philanthropy and social causes should never be used to market any sort of product, unless it is strictly marketing the charity it serves.  I’m waiting for Blake to get honest with it, to make that handbag out of recycled rhetoric and evangelical family “values.”  We’ll call it the Sleazebag.

12 responses to “TOMS Steps in Shit”