This isn’t another review of The Avengers, but it is part of our impromptu Shoot Your Heroes Week here at PFC.  While I’m not sure exactly what that means, I think it sounds rather dramatic and subversive enough to be one of our themes.  Perhaps it will one of many, or perhaps this will be the first and last.

‘Shoot Your Heroes’ comes from the fact I’ve only had two heroes in my life, one of whom—a producer I admired more than any other in the business—I ended up wanting to kill after she tried unsuccessfully to fuck me over by poaching my investors on a film.  The other, Captain Sir Richard Francis Burton, died in 1890, but I’m pretty sure I would have want to shoot him, too, at some point.

Capt. Burton spoke over 20 languages, translated the “Kama Sutra” and “The Arabian Nights” and discovered the source of the Nile. A worthy hero.

If writer-director Joss Whedon were to have the same attitude about heroes as I, he probably would never have made The Avengers, or certainly not with the same believable conviction.  Indeed, after seeing the film I can say with some confidence that hitherto most superhero films, with the notable exception of Sam Raimi’s Spider-Man series, were made by workaday drones with a cynical eye on the big paycheck.  Conversely, The Avengers is a euphoric paean by a fanboy who is utterly enamored of a fantasy world wherein the heroes are titans and the gadgets are kickass.

Nikke Finke, the Delphic oracle of Hollywood, a woman so inside the industry she’s pornographic, said this in her breathless weekend box-office summary:

As one of my commenters succinctly summarizes: “Note to Hollywood: This is what happens when you let comic fans do comic book movies. Joss Whedon knocked it out of the park. The right mix of humor without camp, special effects without overusage, and action with good script. Having actors who like and/or know the characters doesn’t hurt either. Props to the casting folks.”

Up until the past week, I’ve known about Whedon but haven’t paid much attention to him, even though we were at Wesleyan University at more or less the same time, and presumably lurking around the same departments.  But he seems to have kept a very low profile; my sister, who not only stuck around for the full four years but also fundraised for the school’s Alumni Association, and as such is immensely gregarious, seems not to have run across him either.

So now I imagine the early 80s at Wesleyan as this: Michael Bay and Akiva Goldsman fanning Jeanine Basinger as she holds court in the Film Department, Mad Men’s Matthew Weiner grooming his talent with Brilliantine while the lonesome Joss Whedon sits in his dorm room at Butterfield or someplace similar quietly flipping through comic books and sharpening wooden stakes.  Who’s king of the castle now? 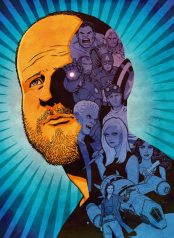 I could never get into Buffy the Vampire Slayer, the first show Whedon created after writing for Roseanne and Parenthood.  But I wasn’t the intended audience, even though it had a huge gay following, no doubt because it’s so flagrantly camp.  Researching this article I tried watching the pilot for Buffy, got ten minutes into it and switched it off; too much latex and bad acting for me.  And, yes, cheesy dialogue.  Whedon was not then the crackerjack writer he is today, but that’s a very normal progression.  As I like to say, you have a lot of shit to write out of you before you get any good.  (I haven’t seen Whedon’s Cabin in the Woods, either, but it’s not relevant to this post.)

What I did do last week in preparation for the inevitable Avengers’ assault on the box office was watch all fourteen episodes of Whedon’s cult hit Firefly, and the feature film that sprang out of that TV series, Serenity.  This amounts to close to twenty hours of viewing, which is testament to how much I love you, my reader, for making it this far into one of my blog posts.

It’s just as well that I can’t stomach Buffy; in terms of where Whedon is today, Firefly/Serenity is much more relevant to the trajectory that brought him there.  His scripts for the pilot and the movie are superlative.  He has an enviable knack for the quick setup, and gracefully avoids the wheels of necessary exposition grinding against the main plot; rather, he uses exposition as a rocket booster to launch the piece swiftly, seamlessly into orbit.  That skill is even more refined in The Avengers.

Whedon’s characters are also completely believable, despite being in implausible situations.  Firefly/Serenity is a space western, a miscegenation of genres (if that isn’t somewhat redundant) that I find particularly enjoyable.  The first of its kind on TV was Star Trek, but what I found more engaging about Firefly/Serenity is that there are no furry, oozing creatures and aliens, no latex unreality with which to contend.

Relentlessly heroic: Fillion as the captain in “Firefly.”

Firefly/Serenity takes place five hundred years in the future, when the human race has abandoned a spent Earth and terraformed a number of planets in another system.  The protagonists are a bunch of rebels and fugitives who hop from adventure to adventure aboard the freighter spaceship Serenity, which is festooned with homey touches like dinosaur toys on the pilot’s dashboard, murals in the mess hall, worn comfy furniture and bric-a-brac in the lounge area.  Why, it almost reminded me of off-campus housing at Wesleyan.  I wanted to live there.

Here and there in Firefly/Serenity you can see a trick Whedon likes to spring on his audience: the visual sucker punch, which is often literally a smack in the face.  In a famous sequence in an episode of Firefly, just when you think Capt. Mal Reynolds (played by Nathan Fillion) is about to walk away from a bad, bad guy, he dropkicks him and this massive steroid villain gets sucked into the spaceship’s engine like a fly into a vacuum cleaner.  It’s so fast and so startling you can’t help but guffaw.  Whedon deploys the same technique a few times in Avengers, never so gleefully as when you think the action sequence is over, the bad guy vanquished and then The Hulk smacks Thor in the face and sends him flying off screen like he’s been yanked by a bungee cord.

It is never more evident than in a movie like Avengers that if the writer can direct, he should, and that directors would have much more control over their output if they spent more time honing their craft as writers.  “If your goal is to become a film director, you must master screenwriting,” as Akira Kurosawa said, especially if you are to guide other writers.  There is nothing more exasperating than working with a director who doesn’t know what he’s doing with a script, who cannot articulate exactly what he wants or the changes to be made.  Thankfully that variety, which makes up the greater portion of helmsmen, never lasts for the long haul.

Hulk has never looked better than as Mark Ruffalo.

There are a number of factors that Whedon brings together to make Avengers such a solid film.  His script doesn’t woefully underestimate the intelligence of his viewer, doesn’t assume that the “lowest common denominator,” as they call the general public in this town, is a moron.  His cinematic style is fluid and graceful from start to finish.  He exacts the finest performances within the parameters of the genre that his fine performers can deliver.  But the more subtle factor is his unashamed, almost old-fashioned sense of heroism.

Perhaps this takes its cue from Captain America, in whom we recognize the US and people we once were during and post-WWII.  That is as wistful an artifact as the bloodied collector’s cards of Captain America from that era, which serve as a catalyst to galvanize the Avengers from a group of wayward individuals into a unified force that can bring down the gods themselves.  I say ‘wistful’ because there are as many things wrong with that era of repression, segregation and chauvinism as there are right.  Still, Whedon is clearly a believer in heroism, in a genuine, un-cheesy way, and he’s unembarrassed to show it.  I allowed it and liked it in Firefly/Serenity as much as I did in Avengers.  It’ll be interesting to see where he goes with it next.