THE WEEK FROM MY VIEW

It’s understandable if you’re confused that Ryan Reynolds might have been outed by DC Comics this past week.  Or rather that the superhero character he played in the colossal 2011 flop, The Green Lantern (not to be confused with the similarly hued disaster Green Hornet), will be transformed into a Ghey when a new issue of the comic hits the stands next Wednesday. 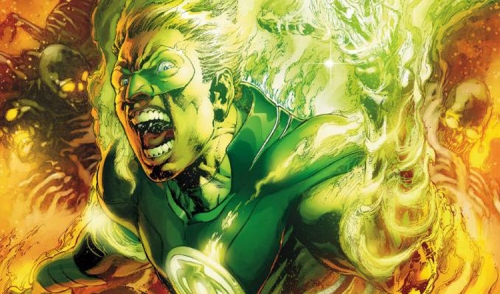 If you’re gonna come out, this is how you do it. Yee-haw!

Don’t worry, girls, Reynolds isn’t being forced to pull a Brokeback retroactively.  The Green Lantern character he played, Hal Jordan, remains a resolute womanizer who could plausibly have landed Scarlett Johansson.  The character whose entire past history is being reinvented is Alan Scott, described by DC as “the leader of the team. He’s a Type-A personality and a successful businessman; he’s gallant, he’s brave, he’s all the things you’d want in a hero.”

I always wanted my superheroes to be gay, or at least gay for me, so we finally have partial wish fulfillment.  However, I’ve never followed the Green Lantern, and certainly didn’t see the movie, so my own confusion was resolved as to why one Green Lantern can be gay and another straight by Wikipedia: this particular superhero is actually myriad people.  There’s a little Green Lantern in all of us, even those with shades of pink.  That explains why everyone in the trailer was dressed the same; I thought the costume department had run out of inspiration. 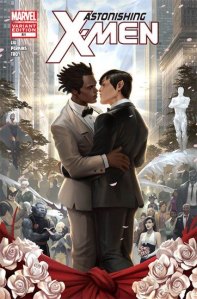 In making Alan Scott young again, and a non-breeder, DC have also had to eliminate his daughter, Jade, and his gay son, Obsidian.  We’re happy to remind DC that Scott can always adopt, just not very easily.  Hiring a surrogate is quicker and you get the bonus of passing on your own selfish gay-assed gene.

It’s hard to believe that this gay superhero thing is still news twenty years after mainstream comics’ first character, Northstar, came out.  Northstar will be marrying his longtime partner in an upcoming issue of Astonishing X-Men, following the footsteps of Archie Comics’ Kevin Keller, whose cartoon nuptials were celebrated in March.

Ignoring the flagrant fantasy aspect of all comic books, presumably because they think stories from the Bible are real, too, One Million Moms is all in a froth over the X-Men wedding, of course, and issued this charming statement:

Can you imagine little boys saying, ‘I want a boyfriend or husband like X-Men?’ This is ridiculous! Why do adult gay men need comic superheroes as role models? They want to indoctrinate impressionable young minds by placing these gay characters on pedestals in a positive light.

Too late, OMMs, we already have Obama as a superhero.  That’s more than you can say.  Neener neener!

Personally, I hope Alan Scott remains single, however.  While I appreciate the mainstream comic publishers going to bat for our equal rights and normalizing us in the eyes of the next generation, I think those “impressionable young minds” shouldn’t be impressed with the notion that if they like it, then they should to put a ring on it.  A few rounds of drinks at The Eagle or a profile on Grindr are more than enough.

Worldwide Pride is upon us, and for once I don’t feel a vague sense of shame at the garish spectacle that unleashes itself in cities large and small across the globe, and alterna-queers like me are forced to duck and cover, eying the closet wistfully.  As Andrew Sullivan pointed out shortly after the President’s endorsement of our equal rights, I feel differently about being gay these days, in a positive way.  It’s hard not to let society’s opinions not mirror who you are, how you should see yourself, and Obama went a long way to altering and empowering that image.

In fact, if I were attending Pride this year, I would go as a skinny pale-skinned black man.  And now I’ve just conjured images of myself as that in hot pants, covered in glitter and dancing on a float throwing condoms at the crowd.  Note to me: need to work on those abs.

It also helps that the graphics for this year’s pride in West Hollywood aren’t some variation on the horrid Lifesavers candy rainbow wrapper, which has always been a graphic thorn in my eye.  Indeed, the banners festooning Santa Monica Boulevard in Weho are pretty decent, featuring a black and white picture of a drag diva with the attractive logo shown on the left as the prominent element in the design.  Right on.

It may be simply because he is so young and twink-like, as he would be known in Homolandia, but Justin Bieber seems to set everyone’s gaydar off on maximum alert.  I’m even less into twinks than I am into his music, so Justin’s sexuality isn’t something I think about at all.  But I do get a giggle every time he trends on Twitter and thousands of people refer to him as she/her.  I don’t know why that’s so funny.  His hyper-macho posturing, maybe?  Just gets me every time.  In fact, I just giggled more than when I imagined myself as a skinny black troll in hot pants on a Pride float.

Have to hand it to this group of Lesbotrons taking the gay Bieber theme viral with a very well-produced, hilarious music-video version of his If I Was Your Boyfriend.  Check this out:

Just as a footnote, if I were One Million Moms’ boyfriend, I would be more concerned that pop stars like Bieber are impressing bad grammar on young boys’ minds.

Even more hilarious than the notion of Lesbo Bieber is the image of Christian bigots from the flyover states planning their trips to either of the Disney theme parks in Florida or California on Gay Day, which is this weekend.

The Florida Family Association is planning to hire two planes to fly over the parks and protest our existence.  At this juncture, I’m beginning to associate the words “mom” and “family” with Nazism and death camps; on second thought, if I had a therapist, she might say I’ve always had that association.

The organizers like to quote a grandfather who took his two-year-old granddaughter to Disney World Orlando eighteen years ago and called it “the most deplorable site we ever saw.”

I agree with you, gramps, because anything Disney is frankly deplorable.  But in this instance I can only imagine that thousands of drunk screaming queens and growling lesbos only added real joy and comedy to that most artificial and cartoonish of vacation destinations, after Vegas, of course.  And how a two-year-old can tell the difference between one kind of adult and another… Well, eighteen years later you’ve by now no doubt impressed upon her young mind what its opinion should be.  I can only hope she either has a will of her own, or that at twenty she’s grown up to appreciate pussy.

Loath as I am to jump on the cannibal bandwagon that has been literally all the rage this week with feral Neo Zombies popping up everywhere, I have to name the fugitive Canadian cannibal Luka Rocco Magnotta as our Schizo of the Week.

I leave you with some of the more dramatic moments from Magnotta’s modeling portfolio.  At least his duck-face expressions aren’t too Disney.  And the way he pops that collar… Grrrr.  Just so Bieber:

Filed under Killough Chronicles, The Week From My View

One response to “Queer as Comics”